EN
Home » Posts » Compressor – the heart of the refrigerator 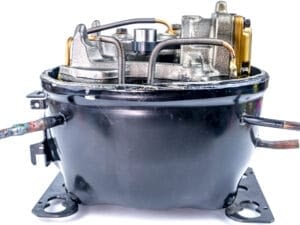 Compressor - the heart of the refrigerator

Since you have to buy a new refrigerator, then approach it seriously. This way you will save your money, keep your nervous system in order and you will be delighted with the new device in your kitchen, which entails a number of positive emotions. And for this you should be guided in the design features of refrigerators, understand the principle of operation of the device, its functional support, have an idea of ​​the modern design of refrigerators and the materials used in their production, so that you spend the money to buy a refrigerator wisely!

From this enormous amount of information we consider 4 types of compressors, which are the driving force of the refrigerator. We will learn the advantages and disadvantages of each of them and make our right choice in favor of the best compressor when purchasing refrigeration equipment. And, at the same time, we will certainly use the advice of professionals.

Types of refrigerators, depending on the cooling system:

In order to general familiarization with refrigeration equipment, we will inform inexperienced customers that, depending on the cooling methods of refrigerators, they are:

that is, the refrigerant / gas circulates the compressor. These include household and industrial refrigerators.

that is, the refrigerant / liquid circulates by heating the heat exchanger. Such refrigerators, most often, are used by truckers.

that is, the functional substitution of electrical semiconductor plates contour circulation of the refrigerant. Motorists, tourists, travelers can hardly do without such refrigerators.

Compressor - the heart / driving force of the refrigerator

The thing is that the compressor is busy circulating the refrigerant / gas in the refrigeration unit. Household compression refrigerators are:

1. Single compressor
which means that both cameras are cooled due to the operation of one motor. In this case, the engine is subjected to constant heavy loads and the probability of its rapid wear is high. But, many consumers appreciate these models:
- for their silence, in comparison with two-compressor devices, and
- less power consumption.
2. Two-compressor,
which means the presence of individual compressors in each of the chambers, which accordingly gives great prerogatives to such an aggregate:
1) Independence of temperature conditions in individual chambers
2) Ability to turn off any of the cameras as needed of various kinds. At the same time, the temperature (+ 15 ° С) will prevent the occurrence of mold in the functioning chamber, since it will be kept constant.
3) Durability
4) Independence of one compressor from another allows super freezing, which is excluded in single-compressor devices.
But, it should be taken into account that the presence of two chambers in the refrigerator does not mean that it is a two-compressor. Confirmation of the presence in the refrigerator of two compressors should be confirmed with the seller separately.

In the construction of refrigerators used 4 types of compressors, it is:

Inverter compressor in the process of the refrigerator does not turn off. When the optimum temperatures are reached, its power decreases, and the speed is reduced. This happens because, thanks to the inverter, temperature drops do not happen at all. Thus, the entire working system of the device is protected from overloads. Therefore, the following indicators are among the advantages of such compressors:
- Energy Saving
- Decrease in noise from operation of the device
- Stability in operation of the compressor
- Increased instrument life
The disadvantage of the inverter compressor can be considered its high cost.

Linearly inverter compressor, as the most quiet and economical in design, owns all the primacy of the advantages of performance, but the cost of such compressors is the highest on the market.
And so, to summarize in the interest of choosing a refrigerator.

One of the most important parameters when buying a refrigerator is its cost. It is clear that the device with 2 compressors will cost more than the one with the 1st. But,

1) it is better to give preference to a two-compressor model.

What kind of compressor to choose? Surely

3) We buy a refrigerator with linear inverter compressors

Only when you are not constrained by your budget and want a chic super tech refrigerator model, simply - know-how!
Choosing the model of the refrigerator, be guided by such parameters as:
- Liter / capacity of the refrigerator , necessary for your use of the device,
- the frequency of periods of home absence , when only the freezer remains on,
- the load on the electrical network , taking into account the allocated capacity to your home,
- the freshness of foods stored in the refrigerator , or rather the quality of their preservation.
Consider that the first step in choosing a refrigerator has already been made. Go ahead and explore the equally important criteria, such as types of refrigerator models, functional equipment, additional functions, refrigerator class, defrosting methods, etc. and the final choice is just around the corner. Do not forget to use the recommendations of the professionals that you are given in the article. Choosing a model of the refrigerator is yours! Have a good shopping!